Before Thanksgiving, I was excited to be a panelist at a meeting of the International Association of Business Communicators of Pittsburgh. The topic was “Applying Traditional Communication Skills to Social Media.” I do love using social media and I’m a firm believer that skilled communicators of any age can be effective on many different social media platforms.

A gentleman in the audience asked, “What historic events would have been different if we had social media when they happened?”

Before anyone else could answer, I said, “If we had Twitter, women would’ve gotten the right to vote a lot earlier!”

Here’s why I think that.

Women and men like using social media, but trends show that women use it a bit more than men. A colorful info graphic on socialmediatoday.com states that 71% of women use social media sites. 62% of Twitter users and 58% of Facebook users are female. The ladies would totally rock the vote using these platforms, but especially Twitter. 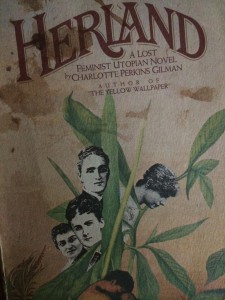 Imagine if women could read this as an e-book.

I’m a historian by training and the Progressive Era was the focus of my studies. I know how hard it was for women to organize, travel and communicate back then. We’re seven years away from the 100th anniversary of the 19th Amendment and it’s still hard for women to organize, travel and communicate. But social media makes it a lot easier for women – whether at home, at work, wherever- to share ideas with other like-minded women and to get educated. I like to think there would’ve been tweets like “Fed up with the federal gov’t! Suffrage Now! #SenecaFalls” and “The U.S. doesn’t yet include US #Suffrage.”

Twitter users tend to have higher levels of education and higher income. I’m not saying that makes them better than non-Twitter users, but I do believe it’s likely they’d have more free time and financial resources to begin the organization and advocacy for the right to vote. And women working their butts off to make ends meet wouldn’t be able to take off work for marches and sit-ins and fancy conferences, but they’d also be able to engage in the debate, send tweets to elected officials, get donations, and raise awareness through social media.

So there are a few simple reasons why I think Twitter would’ve lead to women getting the vote quicker. I also think that Twitter would’ve made it harder for suffragists to jettison African-American’s right to vote. While many women fighting for the vote back in the 1920’s argued that giving white women the vote would counteract giving black men the right to vote, 25% of Twitter users are African-American and there’s no way their equality would be undermined if Twitter was a part society back then.

So what historical events do you think would be different if social media had existed when they happened?