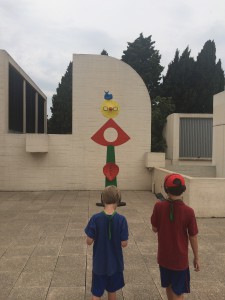 My boys view Miro’s sculpture “The Caress of a Bird” described as a “totem of female sexuality.”

“I’m pretty sure my daughter will be a tomboy,” my friend, father of a nine-month old girl, proudly announced. I automatically smiled, because I think my friends would describe me as more tomboy than girly-girl. My sons are often surprised when I wear a dress. Because girly-girls wear dresses, right?

But then I started thinking about my three boys – and how the male equivalent of the word “tomboy” is not nearly as kind. If I said to another parent, “I’m pretty sure one of my boys will be a sissy!” I doubt they’d smile and congratulate me.

Books for Tomboys? Or Sporty Kids?

Recently I received an email from Kara Thom, the author of Hot (Sweaty) Mamas: Five Secrets to Life as a Fit Mom announcing her new book series Go! Go! Sports Girls! The series really interested and excited me, but it also made me wonder what comparable series would be written for boys.

To be fair, Thom does state the series is for children – not just girls. And my boys willingly read books about boys and girls, so they’d probably love the books about soccer, swimming and running, three sports they really love. Here’s what Go! Go! Sports Girls! is about, according to Thom:

The 32-page illustrated books explore social-emotional growth through sport in engaging stories that empower children to “Dream Big and Go For It!” The titles are:

This project has been a passion for me as I raise three young athletic daughters, but also because I’m part of a movement to give girls better choices. Girls need more than the stereotypical options packaged in pink, as well as options other than over-sexualized toys such as Bratz, Monster High, and their ilk.

Go! Go! Sports Girls are age-appropriate, proportioned to a real girl’s body, project a positive image, and deliver a healthy message. The Go! Go! Sports Girls better reflect our family’s lifestyle and values. Girls play sports and so should their dolls. My daughters McKenna, Kendall, and Jocelyn have grown up playing with Go! Go! Sports Girls, and still do. I might add that my son, Blake, who has no concept that his mom is the author, is a fan of the books as well.

To be clear, I completely agree with Thom’s goal of motivating and inspiring young girls in a different way than lots of popular media representations of girls. But what about my boys? How can I encourage them to follow their interests and passions if those interests aren’t typical “boy” activities? And how come we don’t have a cool word for boys who act like girls? It’s so unfair that girls can be cool tomboys but boys acting like girls is labeled an insult.

I’ve been trying to come up with examples of behaviors that are frequently seen as feminine that I’d want my boys to feel free to adopt in a world without gender stereotypes. Maybe being more empathetic? I wasn’t sure that what I thought was feminine was feminine, by social standards. I found this on Planned Parenthood:

I wasn’t really thrilled when I read some of the items on the list. Because I’m certainly not graceful or quiet. But I would totally love it if my boys learned to be quiet sometimes! Maybe that would be one of the books in my series about boys exploring new behaviors: Little Tommy Learns Not to Scream Every Word! I could get behind a book for boys focusing on that. But I’m not really thrilled about a lot of those qualities on the list. And I think that’s why lots of parents are proud of having ‘tomboys.’ But they wouldn’t love it if their boys were described as weak or passive.

To be fair, Planned Parenthood didn’t make that list to say how women should behave. They follow the lists with this:

“Clearly, society’s categories for what is masculine and feminine are unrealistic. They may not capture how we truly feel, how we behave, or how we define ourselves. All men have some so-called feminine traits, and all women have some so-called masculine traits. And we may show different traits at different times. Our cultures teach women and men to be the opposite of each other in many ways. The truth is that we are more alike than different.”

What could we write?

But I’m really serious in my question here! I’m all for tomboys and girly-girls doing what they love most. And I love that these books for girls are about social-emotional growth through sports (traditionally and still a heavily male arena) because sports and physical strength are a key part of my happiness.

What series of books could we write about boys embracing traditionally female activities for social emotional growth?

2 Responses to “Tomboys or Sissies: Which do you want?”