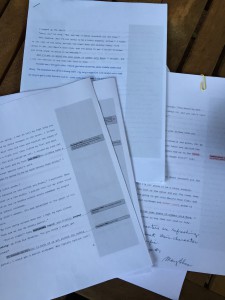 I meet regularly with a friend I met through NaNoWriMo (coming very soon!) to discuss non-fiction queries, article ideas and fiction ideas. We also discuss whether certain writing contests are worth the effort. Having a writer friend as a sounding board is a great asset, and it helps when the writing friend has a different approach than you.

In addition to meeting with my friend, I also meet regularly with two formal critique groups but both have different vibes.

Last summer I learned about the Society for Children’s Books Writers and Editors and attended their summer “critique-nic.” This picnic plus critique group combined my love of food and writing perfectly and following that event I joined an SCWBI critique group in Cranberry. This has been my most successful, continual critique group ever. We have a great chemistry and really work hard to help each other produce our best work.

Joining this SCWBI group has kept me on task and provided good moral support. This group was especially helpful after I had a negative experience at a writing retreat and was accused of being a rude, harsh, inexperienced critiquer. (I’ll have to share more about this story later.) After the retreat, I returned to my familiar group and shared my unhappy story. They reassured me it was probably a misunderstanding or a just a really negative person. This group is a great mix of writers with diverse experience, too. I definitely want to be in this group.

After attending – and loving – my first Penn Writers conference, I learned about a critique group very convenient to my neighborhood and requested to join. I was pretty surprised to learn I had to audition to join this group! I sent off my writing sample and felt very lucky to be accepted. They keep a strict six-person membership limit and while the group meets for an epic 5 hours once a month, they work very hard to give detailed feedback and stay on topic.

I’ve had one meeting with this group and found it to be really engaging and informative. I’m excited to bring my MG novel “Dare Club” and work on revisions with the help of this group. Each person is writing something so different, I also feel like I will learn a lot from each of their works. I definitely want to be in this group, too!

There’s a third critique group that’s still in the growing stages trying to meet every other Wednesday at  Coffee Buddha, a coffee shop also in my neighborhood. Growing a critique group can be pretty hard when people haven’t made the commitment to clear the space on their calendar and prioritize being there. New critique groups are always working out who the leader is, how many people are needed to meet, how often to meet and working to build a comfort level with each other. This is probably the hardest one for me to commit to, since it’s still growing. But I feel responsible for it some reason!

I think two critique groups plus a writing mentor is enough, but three is too many. But I can’t let go of the guilt of abandoning a group of writers looking for support in their community!