I’m so excited to announce my new kids ebook will be released Oct 2, 2015! It’s called Dinosaur Boogie and it is a fun picture book designed to get young readers moving like mosasaurs and grooving like gigantosaurs. This project to self-publish a book was truly a collaborative effort so read on to find out about my talented illustrator, my mind-reading designer, and the cool features I utilized when creating my ebook. 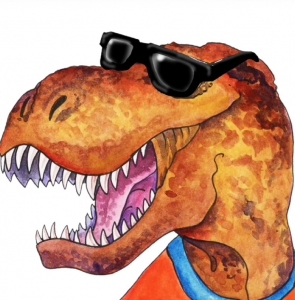 All the cool dinos dance!

This is my third children’s book. If you’ve ever wanted to try and self-publish a book, children’s or otherwise, get in touch and let’s talk about your idea. I can offer great suggestions on how to formulate a vision of your finished product and guide you through the steps to make your idea a reality.

Even though the book has around 100 words of main text and some brief back matter, I’ve been working on the text for Dinosaur Boogie for quite a long time. I wrote the first draft in 2013. If you read that first draft now it wouldn’t sound anything like the finished product. For one thing, the song I had in mind is completely different now and the word count is a lot lower.

With that first draft in hand I went illustrator hunting. I know from experience that to self-publish a book doesn’t mean subjecting people to my awful artistic attempts. Early in 2014, I found an amazing illustrator thanks to writer’s group networking. If you haven’t visited Felix Eddy‘s website, you must! At this point in the project, my vision was to create a simple print book. Then it morphed into an app that would include a song and active dancing dinosaurs. I explored partnerships with local musicians and app developers, but I couldn’t get a license to use my original song idea. The cost and time required to turn this into an app was more than I could invest.

I shelved the project for a bit, but it gnawed at me. It felt lodged in my creative gullet and when Amazon launched it’s Kindle Kids Book Creator software in 2015, I felt like this was a way to bring my dancing dino story to life and free my brain up to move on with other projects.

While I had gorgeous full color illustrations and a sparkly new revised text, I knew I would only do an OK job with final layout and design. So I called up my friends at Word Association Publishers, where I edit manuscripts, and was paired with a creative and talented graphic designer named Gina. She whipped my collection of words and Felix’s art into a cohesive and colorful layout that I love.

With my brand-new pdf file in my virtual hands, I headed over to learn about Kindle Kids Book Creator. There was a small learning curve, but nothing a few googled questions didn’t answer. Soon I had my file uploaded and I learned how to add the very interesting pop-up text feature. I always hoped readers would dance as they read my story, but this feature made it possible for me to add prompts into the pop-ups that encourage kids to feel the fossil beat.

After a few more software downloads and updates, I previewed my book and sent it off to Amazon’s digital library. You can pre-order a copy of Dinosaur Boogie now!

After I Self-Publish a Book, Things Happen

So many times the successful completion and implementation of one project or idea helps me pour full energy into other projects and this was no exception. After Dinosaur Boogie hatched, I found myself highly motivated to complete some other outstanding creative projects. Early in September I made the final revisions on my middle grade contemporary novel manuscript and send it out to a handful of select agents. Later on that same week, I completed four non-fiction queries that had been languishing on my computer. Now they are winging their way off to editors.

Don’t hesitate to get in touch and talk about your children’s book idea! It’s not as difficult to self-publish a book as it may seem.

So now my new ebook is ready and waiting to be devoured by readers. I’m so excited I could ROAR!