I’ve been trying to make a picture book draft once a month, every month, this year. I’m a member of Julie Hedlund’s 12×12 and the focus on productivity and creativity – the art of creating – has been really useful. I know I can come up with an idea once a month and it doesn’t take long to make a picture book draft. These drafts are typically less than 1000 words so it doesn’t take more than an hour to sketch out the first version.

The drafts that seem to work, that could possibly morph into a story for a children’s magazine or perhaps something to bring to critique group and then later to a writer’s intensive at a conference get revised.

As part of the revision process and to test the strength of the story I’ll make a dummy. A dummy is a more detailed draft of the picture book story, laid out with illustrations. Dummies help you see if there are page turning moments, if each set of words can be illustrated, if your story is droning on or getting repetitive.

I’ll also bring my drafts to children to read and critique. My kids are used to being honest about what they like and what they don’t. My kids are also used to seeing picture book drafts that don’t have pictures. But other children aren’t. That’s another good reason to make a dummy.

The first is very visual, a traditional storyboard approach. I used this format a lot when planning out the text and illustrations for Dinosaur Boogie

. She advises you take four pieces of paper and cut them into quarters. Staple them together and you have the pages you need to lay the text and illustrations for a traditional 32 page picture book. 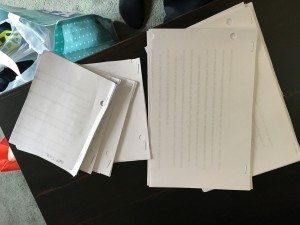 Following Whitford Paul’s advice I created books of different sizes and orientations to accommodate different amounts of text. But I innovated a little with this method and used scrap paper. Yes, that means I can’t write directly on these pages, but I can write text on post-it notes and move them around inside the book pages easily. I can also scribble something on a post-it regarding illustration and move that around, too, and experiment with a little bit of graphic design. Do I want the text above the art? Below? Around the side?

Which leads me to my third method that I use to make a picture book draft or dummy: InDesign. I’m no expert, but I can get around in InDesign. So I will create a document with lots of pages, put my text in and then search on Google for free images. I’m not going to use these images for a profit so I could probably use images that aren’t free, but I like to keep things honest. Then I print out a simple version of an illustrated dummy. These are the versions I take into my favorite test classrooms and try out on kids that aren’t mine. 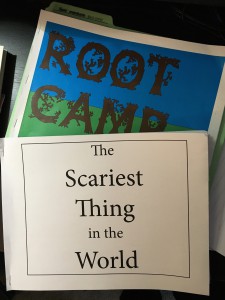 Not too shabby! And I find bringing illustrated dummies to classrooms helps me get a sense of the kids’ real reaction to story instead of them being confused about where the pictures are. And they love learning the phrase “picture book dummy.”

So how do you go about making a picture book draft or dummy? Do you have a favorite method? Are you hi-tech or old school?