OMG!! I can’t believe it!!!! After getting two separate critiques from fellow writers (who were awesome!!!!) and from a very friendly and helpful agent (she’s the best!!!!) I learned I made a huge, really horrible mistake in my novel manuscript!!! And I’ve been sending this manuscript out to agents!!! And they’ve been rejecting it, with nice words, but I still cannot believe I did this!!!!

Don’t worry, though, because there’s still time to correct it if you did, so yay!!

I have been using way too many exclamation points in my novel!!! 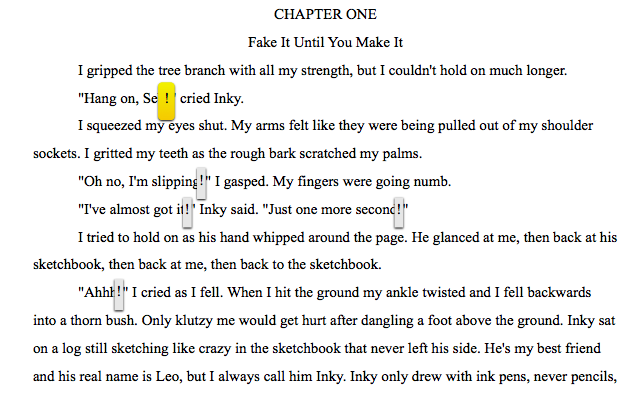 Here’s a screenshot of the first page of my novel!!!

What the heck! Who even does that! Why would I use so many?

Have you ever read a novel with 307 exclamation marks? How many are in a normal novel? I don’t know!!

I’m going to go and delete some before I send the new version out to three new agents who favorited my tweet during the most recent #PitMad. I was pretty psyched to get three favorites!! But I really have to delete some of those exclamation marks. And maybe drink less coffee.

Who am I kidding? I love coffee!!