Who doesn’t love good six word stories? They are short and sweet.

I am so lucky to be able to visit classrooms and hang out with kids. As a writer, there’s nothing more valuable than learning from and listening to your target audience. So when I had a chance to go into my son’s sixth grade class, I decided the topic would be “brevity.” Now, I didn’t tell them that, but it gave me a framework.

First,  I read a short but very skillfully done picture book. You’re never too old to read a picture book and really learn about the essence of story. A picture book needs to tell a story in very few words.

Then, we worked on a 26 word alphabet story about sixth graders. There were some funny parts, like when we included eating and farting. We had tech, including iPhone, video games and memes. One girl suggested we delete “sleeping” and write “Zzzz” – which was GENIUS. We had a lot of sports like gymnastics and karate and soccer.

Finally, we got to dessert: the six word story.

As I took them through the first two parts of the visit, I explained how stories build to a climax of emotion and action and then offer a resolution. I challenged them to include all of those elements in their six word stories.

Here’s what we came up with:

Roasted, toasted marshmallow on the fire. 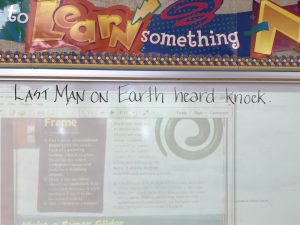 I really loved hearing their stories. And since the main character in my current project is in middle school, I decided to write some six word stories for her.

She quit everything, until she didn’t.

She botched everything except dreaming big.

Do you agree that a lot of six word stories sound so ominous? I love to laugh and have fun and wanted to write a humorous six word story.