What’s worse: letting a fascist regime destroy art and freedom of expression, or paying money to the regime in order to rescue the art? This is the question that confronted me at my September visit to the Museum of Modern Art. 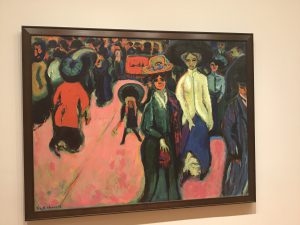 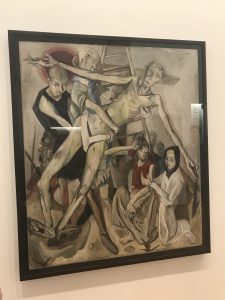 This month, I returned to New York to pass the tiara of the Pen Parentis fellowship on to the next awardee. Megan’s story was moving and emotional and I look forward to sharing our writing experiences together.

We visited MoMA (The Museum of Modern Art) and saw some incredible art. I was really captivated by the work of Ernst Kirchner, part of Die Brucke, (The Bridge), a group of artists seeking a new mode of artistic expression. There’s really nothing like finding your people, is there?

They worked to affirm their heritage but also sought the avant-garde. They were definitely free thinking in both life and art. After serving in World War I, and being discharged, he developed alcoholism. He build a body of work, his health improved, he gained renown. He got positive reviews.

Then the Nazis came. His works were removed from museums. Germany invaded other countries. Kirchner objected. He was labeled Degenerate. He was expelled from the Academy of Arts in Berlin. In 1938, he shot himself and died.

I don’t love every book I read, I don’t think every work of art is amazing. But we must remain vigilant against the silencing of creative voices, especially those that challenge evil.