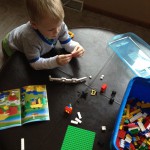 You arrive at work and find a lovely gift on your desk – a brand new box of Legos.

Do you dump them out on your desk and start stacking?

Or do you flip through the enclosed book to find a project you think you can tackle?

Legos are a double-edged sword. They literally provide the building blocks of creativity – versatile tools that allow kids and adults to experiment, envision and eventually build amazing creations. They are basically open-ended and come in a wide variety of colors and sizes.

But they also come with guidebooks that show you step-by-step how to build completed projects.

My kids get frustrated when they think they must create the projects outlined in the book. My husband and I love the fact they are trying to follow the rules (it’s a rare moment) but we are also dismayed when they refuse to strike out on their own and build “whatever they want.”

There are lots of reasons they’d rather follow the steps in the book, and they are the same reasons people are reluctant to be creative in their professional careers or work place.

2. Fear of the unknown. They think they have to know what they want to make. My kids want to build, build, build. But they are not comfortable with just randomly stacking bricks until a idea comes to them. They don’t know how to explore without a goal. How often do you feel more comfortable just following someone’s else’s instructions instead of striking out down a path without a real goal in mind?

3. Scared to fail. My kids are really Lego-newbies. They don’t know how to make curved sides out of rectangular bricks. They don’t know how to build the internal structure that will give them the external design they envision. So instead of trying, failing, trying and failing again, they would rather just work through each project as laid out on the pages and guarantee a nice, unoriginal, project. Do you pick the path everyone’s already walked because it’s safer than trying something new that might not work?

When is the last time you played with Legos? If I handed you a pack today, would you follow the steps in the book or work on your own original design?