I read a lot of children’s books but lately I’ve been really angry to discover so much sexism in them. My second grader is now reading chapter books but he still wants me or my husband to read with him, so I get to check out of a lot of books I’ve never read before. One of our favorite series is Junie B. Jones. We found the Ready Freddy books to be enjoyable but a little too repetitive. But recently I’ve had two very unpleasant discoveries of sexism in some popular chapter book series.

Here’s one example that angered me: 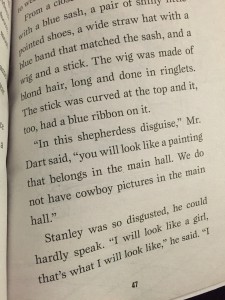 From The Original Adventures of Flat Stanley 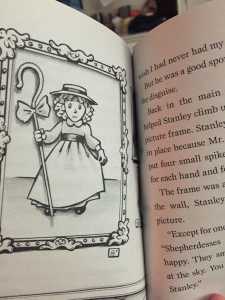 From The Original Adventures of Flat Stanley

I stopped reading here and had a conversation with my son about it. I asked him what he thought about it, and he said Stanley should just wear the costume to trick people. I explained gently that it hurt my feelings for someone to think it was disgusting to dress like a girl. In this case, I hoped to build the notion that all politics is local in my son, so he could realize sexist statements like this have implications for people he loves.

It really bothers me that my son read about a character, the hero specifically, who thinks it’s disgusting to dress like a girl. The Flat Stanley books feature a little boy who becomes flat and uses his flatness to help people. And his parents are unfailingly polite. But this is a pretty rude sentiment to indicate it’s disgusting for a boy to dress like a girl. It’s pretty culturally insensitive, too. While it may the reality that boys find it disgusting in our culture to dress like girls, what that does is reveal the underlying belief that girls represent something boys should not admire or want to look like. That being a girl, looking like a girl, is undesirable. But it’s ok for girls to wear pants like boys, wear sports uniforms like boys, and be called tomboys because it’s ok for girls to emulate someone with more power in our social system. But according to this passage you’d have to be an idiot to want to dress down the social power ladder.

This message is subtle but persistent. Kids are reading it and believing it. A similar sentiment is repeated in one of the newer chapter book versions of the Amelia Bedelia stories. 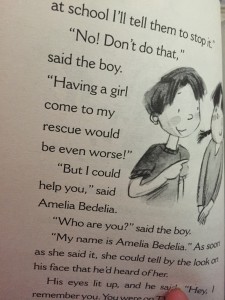 When I read this passage to my son, I stopped reading and fumed. It made me so mad. I made myself calm down and asked my son about it. He said he didn’t know what to think. I asked him if he would let a girl help him at school if he was in trouble. He said “you’re a girl, Mom. You help me.”

I know the power dynamics are different when the kid is seven and he’s thinking about his mom. But reading this sentence indicates that boys should not let girls help them at school, because that’s proving he’s so weak, so incapable of protecting himself from bullies (who were mocking his purebred prize-winning poodle), he’s reaching up to girls for help. This statement from the author is based on the assumption that girls are weak and less powerful, and implies that getting a girl’s help means this character even weaker than girls.

It made me sick. I’m getting rid of both books.

I’m all for freedom of speech and I’m super against censoring and banning books. But that doesn’t mean I have to allow my children to read these books. It also means I’m ready to have this conversation with my kids whenever they encounter any kind of racist or sexist or discriminatory language in books.

I supported the We Need Diverse Books movement and I really do believe books should reflect more about the reality of the world we live in. But even though institutionalized sexism is a reality, I don’t think it has a place in children’s books. I work hard to challenge ideas from our society that pink and purple are girls’ colors or that boys are better in sports. I let my boys wear nail polish whenever they want and I would even let them wear skirts or dresses if they asked. (They haven’t.)

It’s scary to think of our kids as objects of ridicule if they attempt to challenge sexism. But it’s scarier to me to think of my boys adopting sexist beliefs and then acting on them as adults.

I urge you to look for ways that books perpetuate sexism and have the conversations we need to have with our kids to change this inaccurate power dynamic. And I urge you to challenge your own thinking and look for ways you could be continuing these stereotypes. Talk to your children about sexism (and racism, and all kinds of discrimination) and be part of the change.