I juggle a lot of projects simultaneously, but every once in awhile I dive in full force on a project and decide to work on it until it’s ready to go. I’ve kind of dabbled on a certain story about bees for awhile. Back in April 2014, I went on an SCBWI writing retreat back and jotted down the basic outline. Throughout 2014 and 2015 I’ve read lots of books about bees. In 2015, I went on a bee walk! 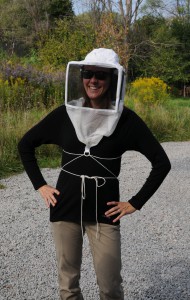 This is going to BE fun!

But this year I’ve gone ahead and committed myself to finishing the full draft. I’m over 15,000 words into the first full draft. My final word count goal is around 35,000 so I’m close to halfway. The number of bees in a hive actually outnumbers the words in my manuscript.

Which brings me to my next question and it’s not about bee science. It’s actually “who is my main character?” It’s pretty hard to pick one main character out of a hive of 50,000 bees.

It’s also hard to write animal, or in this case, insect dialogue. It has to be just right to be believable. As another part of my research, I’m reading some of my favorite animal fantasy books Watership Down and Mrs. Frisby and the Rats of NIMH.

Right now when I need a break from writing new chapters, I go back and work on fine-tuning the first two pages. I want to strike the right balance between description and setting the scene in the hive, some dialogue to draw in younger readers, and establishing a page-turning problem. At a recent critique group I was told that I didn’t make it obvious enough that I was writing about honeybees. I felt a little defensive about the comment, though, because when kids pick up a book they will see (hopefully) a bee on the cover, read a blurb on the back of the book, read the tagline, etc.

Despite that, I decided to take a look at the first two pages of these books. 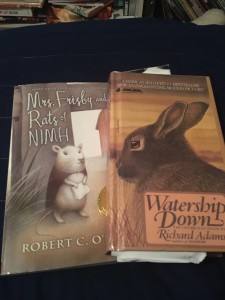 So there’s no dialogue here but there is a big problem presented right on the first page. And the words “field mice” are mentioned right in the first sentence. 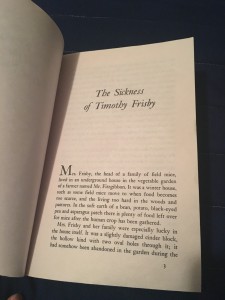 Here’s the first page of Watership Down. Rabbits aren’t mentioned until the third sentence, and it’s not even clear that this story is about rabbits. Unless you look at the front cover, then you get a clue that the story is about rabbits! There really isn’t a problem clearly stated here on the first page unless you really think deeply about the quote from Agamemnon and know something about the role of Cassandra. 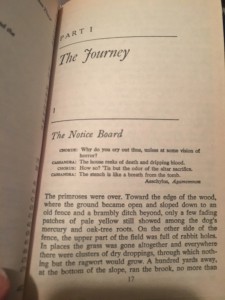 On both first pages, there’s really a lot of detail about the natural setting. I love that about these books. I feel really dropped into the scenery and the experience of the main characters. That’s really essential to the animal fantasy in my opinion. I’m definitely going to focus on that aspect of writing in my bee story.

2 Responses to “How to Write an Animal Fantasy Story”