My fingers are a little sappy as I write this. By sappy, I don’t mean weepy and dramatic,  I mean sticky and covered in sap. Because even though I bought garden gloves for my boys so they wouldn’t use mine, I didn’t go and grab my garden gloves when it was time to drag pine boughs through the woods to help my boys make a hut.

(Bough is a homophone for bow, meaning to bend at the waist, while bow is also homonym for bow, the one you tie on birthday presents.)

We’re making a hut because it’s summer and what else does one do in summer except whatever one wants? 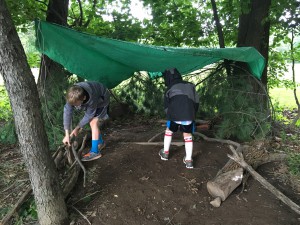 We recently visited Meadowcroft, a rock shelter in southwestern PA that has yielded evidence of some of the oldest human habitation in North America. While we were there, the boys had a chance to visit a Monogahelan tribe village, built by hand by the staff of Meadowcroft.

My middle son shrieked with delight when the village came into view beyond the new spring leaves of the forest. He had just studied Native Americans in third grade social studies and had lots to tell us. The boys loved learning about farming, gathering, living, and hunting.

So when school got out, they wanted to build a hut.

I struggled with helping them and letting them figure things out on their own. I tried to offer ideas without telling them HOW to do things. 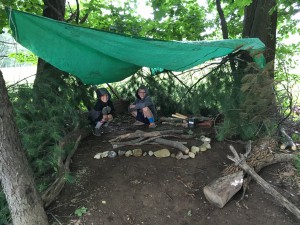 They’ve done pretty well on their own. I gave some help with the tarp, but they’ve built the walls and done the interior, such as it is, on their own.

Their project reminds me very much of My Side of the Mountain, which I started reading to them last night. As I expected, it spoke to their little survivalist souls. They are ready to devour more. They are also excited about using the Internet to learn about making tools and shelter as opposed to just playing games.

Yes, there’s also an undercurrent of Lord of the Flies when I hear them making clubs and slingshots, but we won’t be reading that book for a few years.