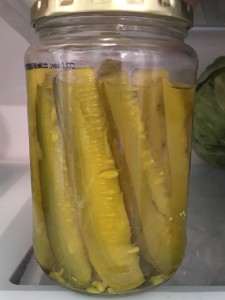 I’ve loved pickles all my life. While I’ve only lived in Pittsburgh for sixteen years, I love the city. And I love that there is a festival all about PICKLES! It’s called Picklesburgh.

Picklesburgh is for everyone – from pickle fanatics to just pickle curious. With the help of our sponsors, vendors and volunteers, we’ve assembled a two-day event around all things pickled. It’s not just about pickled food though.  No celebration would be complete without music. A broad selection of local musicians and genres will grace the stage, all set to the backdrop of a glorious Downtown Pittsburgh.

I wish I could attend Picklesburgh, because there’s a pickle juice drinking contest. And I know just who would win. The main character of my novel Dare Club, a klutzy but brave kid with the unfortunate nickname Scabs.

“We’re going to test your taste for danger.” She smiled and I gulped.

She set the items on the table in front of us.

“Are those pickles? I love pickles,” I said.

“What are you talking about?” I laughed. “People don’t put butter on dry skin!”

I made a mental note not to eat butter at Inky’s house anymore.

Marta moved the jar of pickles in front of me. It was a half-empty jar and the long pickle spears splashed around in the green juice.

“I dare you to drink all of the pickle juice in this jar.”

She nodded and smiled.

“Think of this as your initiation into the club,” she said.

“But what do you do in the club?” he insisted.

“Nothing big. Just figure out your fears and face them,” she said.

The small flame inside me sparked. That sounded exactly like what I wanted.

“So this is the test to see if you two can handle it. It’s not for little kids,” she said.

“We’re going into sixth grade,” I reminded her. “And Honors classes.”

“Grades aren’t everything,” she said. “This is about real life.”

“But what do we do?” Inky asked again.

“I already told you. You face your fears,” she said.

“Is it dangerous?” Inky said.

“It can be. Not always. But yeah, you have to be ready to for some danger.”

Her words were a SuperSoaker aimed right at my little flame of excitement. I didn’t need any more scrapes or scratches.

“And if you decide to do it, you have to do it all the way,” Marta continued. “No quitting. No backing out.”

I wasn’t sure this was such a good idea.

“But if you do it, you’ll be a different person.” she promised.

Never mind. It was a great idea.

I squinted my eyes shut and pictured myself at the mouth of the Tunnel. I felt nauseous. I pictured Gunderpants laughing at me. My nausea turned to anger.

“Seb, maybe you just think about this,” Inky put his hand out to stop me.

“I know I want to be different,” I told him. “I don’t want to be Scabs anymore. Is there a time limit on how fast I have to drink this?”

“How about before I die of boredom,” Marta put her hands on her hips.

“OK,” I twisted off the lid and the familiar scent of vinegar and dill hit my nose and my mouth watered. I love the taste of pickles but I had never drunk just the juice. At least it was a flavor I liked. I decided to go big at the beginning and took a huge gulp from the jar. The cold liquid rushed down my chest and when it hit my stomach, I already felt different.

I stared at Inky in shock. I hadn’t thought of that.

“No, I did not poison you. But I like the way you think, Leo,” Marta laughed.

“And now it’s your turn.” Marta pointed at Inky.  His smile disappeared. She slid the butter toward him.

“What? Why me? He’s the one who wants to go through the Tunnel!” Inky jabbed a finger at me.

“Not by myself!” I yelped. “I thought we were in this together!”

I interrupted him. “You’re my best friend! You can’t abandon me now!”

I interrupted again. “I’ll owe you so huge!”

I breathed a sigh of relief. He was going to do it, too, but I could tell by Inky’s voice he wasn’t thrilled.

“It’s basically the same as Sebastian’s dare,” she said. “I dare you to eat that stick of butter.”

“I double-dog dare you,” she said. I took a big gulp of pickle juice.

“Come on, Marta. Enough with the butter.” He crossed his arms.

“I triple-black-cat dare you,” she held up three fingers. “Last chance.”

“I’ll be sorrier if I eat that entire stick of butter,” he said. I took three little sips of pickle juice. It was harder to force myself to drink it, but I kept going.

“Aren’t you worried about what might happen if I get mad?” Marta asked.

“I’ll take my chances.” He shook his head and looked away from her.

“I see,” she said. “Not worried about yourself, are you?”

Inky definitely didn’t look worried. She slid her gaze over to me. There was about a half-inch of green juice still swirling around the bottom of the jar so I quickly put the jar to my lips and tilted my head back and the tangy pickle juice rushed into my mouth.

“Leo Martinez, I dare you to take one enormous bite out of that stick of butter or I will make life miserable for your friend Scabs here.” She put her hands on the table and loomed over him.

I coughed and spit out some of the pickle juice. “What? Why me?”

“This is so dumb,” he said. He picked up the butter, unwrapped one end, opened his mouth wide and stuck the butter in. Slowly his teeth sunk into the creamy yellow rectangle and the bite broke off into his mouth.

“That’s a big bite,” I noted. I glanced at Marta to make sure she agreed, but she was just watching Inky.

He chewed slowly at first and I could see the butter making his cheeks bulge out. He took loud breaths in and out his nose. Marta watched him with a huge smile on her face. It took forever but Inky finally managed to swallow his enormous bite of butter.

“Gah! It’s stuck all around my teeth!” He kept smacking his mouth and moving his tongue around to get the leftover butter bits out.

“Thanks, Inky!” I grinned. I knew he’d never let me down.

“Finish that,” Marta told me. I swallowed once, twice, three times until it was gone. I opened my mouth to ask her if we had passed the test, but instead a huge pickle-stench burp came out. I cracked up.

“That wasn’t so bad, was it?” she said. “I think we all learned a lot from that little experiment. Come back tomorrow morning. Be here by nine. And bring some donuts.”

Marta walked back to her house and left us standing there. I couldn’t wait to come back tomorrow and do the club.