This month, I read the boys two Judy Blume books: Tales of a Fourth Grade Nothing and Superfudge. These were two of my favorite kid book series growing up. 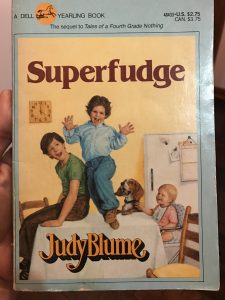 I successfully glossed over the part where a secret about a certain holiday character is revealed, and the boys asked for more books about Peter and Fudge. 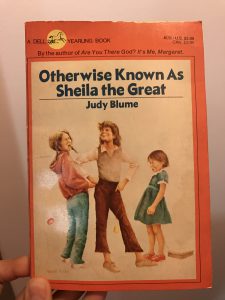 I searched on Amazon for other books in the series. That’s when I learned that the Judy Blume books have been updated and re-released for modern readers. I just wasn’t interested in those versions. I feel like reading the old versions gives my kids a glimpse into the past when the past was the present.

We’re going to check out Double Fudge and Fudgamania from the library, but I ordered the classic version of Otherwise Known as Sheila the Great.

Would you choose the updated or original versions?

There’s nothing like a good series to combine the familiar character with the unfamiliar new adventure. After I saw how much they loved these books from my childhood, I thought about other series I loved. asked them if they wanted to hear some Ramona books, or some of the Little House series. I’ve already shown them the movie version of Anne Shirley, but I don’t really see them tackling that whole series like I did. My oldest was into the Goosebumps series for awhile but has moved on. 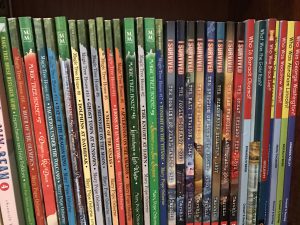 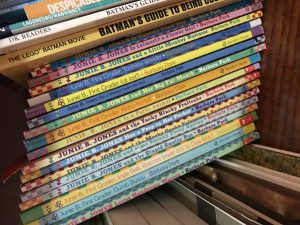 Nowadays, their favorite kid book series are the Junior B. Jones, Percy Jackson, and I Survived. They also love the non-fiction Who Was? What Was? series. Of course they’ve read Harry Potter. But the middle is now on to Ranger’s Apprentice and you all know they enjoyed the  (disappointing) Unwanteds. They read some Magic Treehouse but no Lemony Snicket or Time Warp Trio. The youngest, who loves horses, likes the Breyer’s Stablemates series from Scholastic.

What favorite kid book series have you shared with your kids?

What are their favorite modern book series?