Based on an idea I call the Stuart Little Experiment, I think it’s harder to be published today in children’s literature. I’m reading Stuart Little with my kids right now. At first they were reluctant to start it. I don’t give in to complaints easily, and they can’t resist me reading to them while we are all snuggled under blankets. After the first few chapters they were hooked.

“There’s not much happening,” said the middle kid, age 11. “But this is fun to read in a day-in-the-life-of kind of way.”

I agreed, parts of it are really entertaining. I particularly liked the scene where Stuart gets caught up in a window blind. The cat is very amusing in that chapter and the idea of a mouse wearing dapper clothes.

Yet there are other parts that make that same kid cry out in disbelief and a little touch of dismissiveness.

“Why does the mother still think this mouse is really her child?” he asks more than once.

We kept reading. And then it happened. I read one chapter that made me think, “Nope. No way. This would never make the cut.” 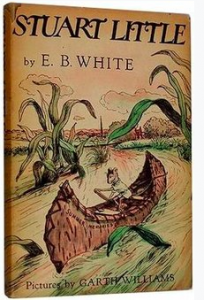 Before I did my research, I assumed Stuart Little hit the shelves after Charlotte’s Web. Editors would take anything he wrote after Charlotte, I supposed. I was wrong. Stuart Little was written in 1945, and it was White’s first book. But back then, I’m not sure White had very stiff competition.

(Have you even heard of, let alone read Rabbit Hill, the 1945 Newbery winner?)

Some classic books, while quiet, could still find life in 2018. I think Charlotte’s Web easily could be published any year. The horrible pigeon book I read that somehow, beyond all rational thought, won a Newbery Award would never, ever make it today, in my opinion. Probably the roller skating book that also won a Newbery would be dying a slow death in a slush pile today. At least I hope it would.

I think, sadly, Stuart Little would be, too, thanks to the sailing chapter. It started out fun with a cute image of Stuart longing to sail the boats at Central Park. Of course he was dressed for the part. But then White basically dives deep into self-indulgent waters and overloads his text with so many nautical terms that I don’t think either of my kids could form a mental image of what was happening. I think they were relieved I was reading aloud so they didn’t have to struggle with the strange terminology that was served up without enough context to help them grasp the ideas. They got the gist, but I think  other kids might have lost interest, or felt frustrated.

At the very least, I think editors today would heavily revise the chapter.

And what is the purpose of the chapter? To show off White’s nautical knowledge? It taught us a little of Stuart’s character, and perhaps it will tie in later with some kind of plot or story, but it really felt like White was pleasing himself and not necessarily a reader. I’m think this book would not be published.

I would love to try this experiment. I want to put chapters from older, beloved children’s books in front of editors with altered names and see what modern editors would say about the content, writing style, language, etc. Would Stuart Little be published today?

It would be challenging to try and identify books that editors hadn’t read, and to not clue them in that they are reading already published books. We’d need to throw a few fakes into the mix. I wonder if there’s an idea for a conference session somewhere in here??