This billboard for Fodi Jewelers cracks me up every time I drive by it.  It’s not the use of the word ‘chicks’ that got me, it’s the fact that they put baby chicks on the billboard. 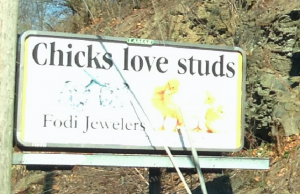 Yes, we get the pun that studs is either diamond studs or studly men. And both of those meanings of the word “stud” make sense in this context. I’m just glad they didn’t put some pieces of lumber on the billboard, too. I have to say the image of the baby chickens is just silly and makes me laugh every day. 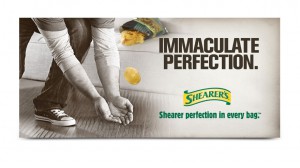 This billboard created by Marcus Thomas for just the Pittsburgh market makes perfect wordplay sense. It’s the 40th anniversary of the Immaculate Reception and Pittsburghers will totally get this reference. Makes me wanna buy some chips right now!