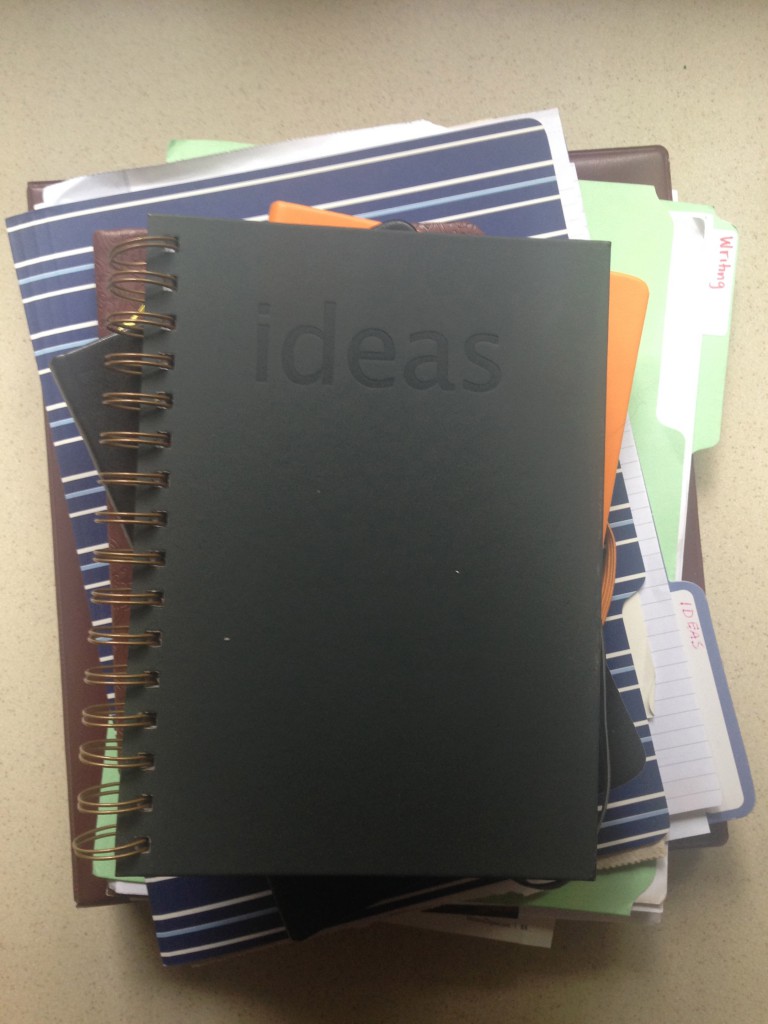 How do you organize ideas for writing?

It is not easy for me to keep track of ideas. When I read, listen or run ideas and inspiration often overwhelm me. If you are a freelance writer you probably have this same problem and probably have some system in place. Maybe you’ve tried several different systems.

One that works for me is a centralized, somewhat disorganized notebook. I carry it everywhere and put everything in it. It turns out I am using a system developed centuries ago.

I commonplace! And a lot of other writers I know commonplace. But I don’t think we knew we were commonplacing. I actually have several commonplace books and I think I’m going to keep commonplacing for awhile! What is commonplacing? I first learned about it in a book by Steven Johnson. Here’s his description:

Scholars, amateur scientists, aspiring men of letters – just about anyone with intellectual ambition in the seventeenth and eighteenth centuries was likely to keep a commonplace book. The great minds of the period – Milton, Bacon, Locke- were zealous believers in the memory-enhancing powers of the commonplace book. In its most customary form, “commonplacing,” as it was called, involved transcribing interesting or inspirational passages from one’s reading, assembling a personalized encyclopedia of quotations. There is a distinct self-help quality of the early descriptions of commonplacing’s virtues: maintaining the books enabled one to ‘lay up a fund of knowledge, from which we may at all times select what is useful in the several pursuits of life.'” – Steven Johnson, Where Good Ideas Come From

This is just what I’m doing, carrying around a notebook scribbling down thoughts and ideas that erupt in my brain throughout the day. But I admit I use more than just one notebook. I also use the Notes and Voice Memos apps on my smartphone. And I tear out pages from magazines. And I snap photos with my smartphone. And cover my wall with sticky notes. And writing up lengthy thoughts on looseleaf in my binder. And highlighting text in ebooks. And folding down page corners in print books. Sometimes I actually sit down and gather all of this information into one place and think about how it connects and leads to new insights.

And that, writing friends, is commonplacing.

This is a good time of year to think about how your organization system works (or doesn’t) and what style suits you best: plotting or pantsing (writing by the seat of your pants.) National Novel Writing Month is coming in November and you definitely want to be ready. I failed my first year but learned valuable lessons and had a great system in place for 2012 where my novel was based off of daily writing prompts. I plotted and pantsed and planned and prepared and finished the month a winner!

But organizing ideas for writing isn’t just for fiction writers. Business owners need to have some organization for their web copy, newsletters and social media content. The fancy term is editorial calendar – does your business have one?

Maybe I don’t have the perfect system in place to organize ideas for writing, but I think it would be much more difficult if I didn’t have any ideas to organize. I’d rather be overwhelmed than dry. So how do you organize ideas for writing? What systems have you tried that failed? Still using the old index card system or have you updated to Scrivener?