People new to writing often say, “I shared this story with my kids and they loved it!” Unfortunately that phrase smacks of amateurism. It’s great that your kids love it, but your kids also love you and kids can’t often separate their feelings for a person from something the person creates. Most adults can’t even do that! So while it’s great to ask kids for their opinions and creative writing ideas, it takes time to learn when their advice is valuable.

So while I refrain from mentioning if my kids like something I’ve written, I’m pretty shameless about working with my kids for brainstorming and inspiration. They have some great creative writing ideas. But I don’t stop there. I use other people’s kids, too. Just yesterday I called a friend’s third grade son and he really solved an obstacle I had in my app idea.

Recently my middle son had a friend over and they kept shouting “Ho, Ho, Ho, oh no!” That phrase sparked a story in my brain about either a clumsy Santa Claus, or a not-so-helpful assistant to Santa. Over dinner I shared my ideas with the boys and we decided to write a story about Santa’s new puppy who gets into all sorts of trouble.

My kids really got into the story development process. My fourth grader brainstormed character names for the puppy. He did this on his own, without me asking. I love that he knows I will listen to his ideas and that he cares enough about my writing to contribute and make it stronger. I also love how he knows not all of these ideas will work. That’s a big concept for a young kid. 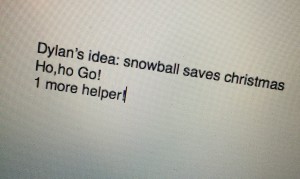 Good titles are hard for me.

Not only did my middle son and his off hand comment turn into a creative writing prompt, he suggested alternative titles. I was calling the story “Santa’s Best Friend” but I really like “One More Helper.” Titles are so hard for me but titles and cover images sell books and stories. I love how he suggested more than one alternative title.

The boys also suggested topics for other stories. They are little generators of creative writing ideas. The middle one wanted to read about an apple seed, so that became “Root Camp.” And again, the middle one wanted something about salt and pepper, so I am in the process of writing a kid’s mystery about which seasoning pushed pepper out of the spice cabinet.

The older son gives me great critique on my middle grade work. He tells me if he understands the dialogue and if it sounds real or not. He also tells me what doesn’t make sense to him when I describe action. He’s doing a lot of text analysis in class right now and his critique skills have definitely improved.

I don’t ever mention to editors or agents how my children feel about my work, but that doesn’t mean I’m not asking them. I value their input and their ideas. But I also involve them in the creative process and share my struggles and confusion with them. I let them know when I’m stumped and if they help me figure out a missing piece of the story, or fix that line that doesn’t rhyme in my story about dinosaurs rocking out I give them full credit.

It can take awhile for a child to learn that not all of their ideas will be used. And it can also take awhile for people to accept input on their creative works. But it can be so effective to get outside input. In this Publishers Weekly podcast, author Holly Black described how she develops some of her works by sharing rough drafts and general ideas with her critique group. Her process sounded really familiar to me and really validated my ideas that getting input can make a better final product.

Are there certain people you trust when it comes to contributing creative writing ideas?

Are there certain people that you never listen to?

One Response to “Creative Writing Ideas”