So a year ago I put out a tweet asking people what story I should work on for NaNoWriMo 2014. I got more votes on the second project and have put the first project aside for awhile (but it’s still in the back of my head). 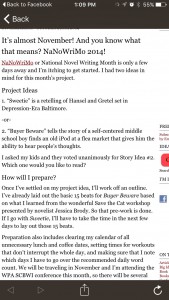 For this year, instead of waiting until the last minute to write a novel off of the top of my head, I decided on my NaNoWriMo project well before November 1. And I started getting to work on the backstory! My planned project was going to be about two young lovers in Pittsburgh during the Civil War who both want enslaved people to be free and to keep their country whole. But they believe there are different ways of doing this. So are a part of my planning, I started sketching out scenes. I named characters. I described my characters. I ordered books about Civil War era Pittsburgh from the library. I went to the History Center and located original documents and learned how to access records of newspapers from the time period!

WHEW did I plan.

Then I spent October 18-21 at the Highlights Foundation learning how to write page-turning non-fiction for middle grade readers. While it was only a few days, when you’re in a small group workshop all day, for all meals, you learn a lot about people. And the instructor of the workshop, the wonderful Deborah Hopkinson, took the time to listen to my idea for my NaNoWriMo project. She pointed out some flaws and asked good, hard questions. I’m interested in writing a book during NaNoWriMo, but I’m also interested in writing publishable, marketable books. Then she asked me a very important question: why wasn’t I writing a book about running?

I admitted that I felt it would be self-indulgent and selfish. I worried it wouldn’t be marketable. I worried I couldn’t write it in a way that shared how important running has been to me as a woman and writer. She pushed me a little more and we discussed a possible character and the story arc. I felt overwhelmed and emotional. I felt exhilarated. I left the Barn (where we had our classes and meals) and I walked to this spot on the trail and I cried a little, overwhelmed at the idea that I could write this story about a girl who comes of age and unlocks the secrets to happiness thanks to running. 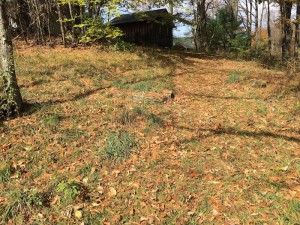 Where I decided on NaNoWriMo 2015

This novel is a lot more of a pantser project than my first idea, which is nice and planned. But maybe this is a good thing! Maybe I write one with emotion and on the fly and I write the second (the Civil War one) after NaNoWriMo when I can really read info and add in the important historical details.

I know I can do this. Thanks to my experience as a runner, I know it’s all about putting in the work daily. And running isn’t just a theoretical part of my writing. It’s a practical part because  I think through plot, flesh out characters, and sketch scenes in my brain during every workout.  I can write both of these stories. I have already written full manuscripts for The Forest of Dreams, Runner’s Luck, and Dare Club. I have completed two big revisions on Dare Club. I can write both my planned story and my pantser story.