Lots of parents don’t let their kids watch the movie versions of popular books before their children read the books. I’ve heard this about Lord of the Rings, Divergent, Harry Potter, Diary of a Wimpy Kid and more.

I totally see the logic of this. Parents are worried their children won’t read the books if they’ve already seen the movie.

I want readers in my family, too. But we probably sound a little crazy and lazy to other families, because I let our kids watch the movies before they read the books. In fact, I often encourage it. I think it’s a great way to for my children to find stories that interest them and that it actually encourages them to read more instead of reading less.

Recently, I let my kids watch entire collection of Harry Potter movies. And you know what? Watching the movie first might have made my kids better readers, because after the movie they only wanted to read the books more. 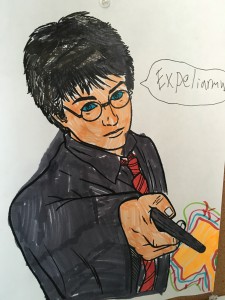 My oldest son, who is 11, had already read the first four a few months ago but after the movies he was even more motivated to read the final three. He was so interested, he actually went back to the beginning and plowed all the way through the entire series of books. My middle son, who is only eight years old picked up the first book and is now almost finished the fourth book. My middle son was actually more excited about reading the books after seeing the movies because he wanted to know more of what happened. Instead of going from the rich, detailed book world to the skim-and-dip experience of a two-hour movie experience, he went the other direction. He went from the brief, delightful movie experience and dove into the fully fleshed out magical book world of Harry Potter with extra scenes and extended dialogue and an imaginative setting. He loves pointing out things he didn’t understand in the movies that are now clear to him because of the detailed book.

I did try it the reverse once, with the classic book The Last Unicorn. I read that book out loud to my sons over the course of many weeks. They were transfixed and captivated by the unicorn’s search for her lost people. When we finished, I announced that we could now watch the movie. At the end of the ninety minutes, all they did was talk about the parts of the book left out of the movie.

“If I watched the movie first,” my middle son declared, “I would want to read the book right away to learn what I had missed.”

I totally think the books are always better than the movies. Truly. And I want to reiterate that I get that parents are looking for ways to make their kids better readers. But parents might not realize their well-intentioned plan can backfire.

Look at this way: Did you ever play a sport as a kid? Did you ever have to run laps as punishment for something you or your team did wrong? Did it make you love running? Sure, it made you stronger as an athlete but it became a punishment, not a reward. Many adults still think about laps with loathing and dread running. Reading shouldn’t be the same thing.

Were you allowed to see movies before books as a kid? Did it make you more or less of a reader?

What other ways do you find helps make kids better readers?