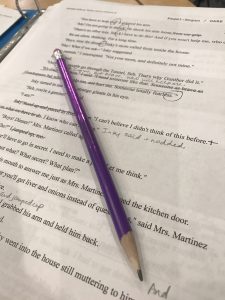 Hello, manuscript. Get ready to work. I have some serious December writing goals. Tomorrow, I will start a new post and update it daily, with notes to myself, in order to be accountable and to reach these goals.

It’s not like I haven’t been writing. I did write in November, I just didn’t do NaNoWriMo. But that’s fine. Honestly, it’s about whether I am writing, not about what or how much. I did NaNo for a few years for confidence and practice and quantity, but I think I need to focus on quality now.

I have three completed novel manuscripts. I’ve submitted one for agent feedback several times, but I’d like to have two others ready to submit. I feel like these two others have good legs when it comes to having strong premises (not just ideas) and interesting, unique characters. They are all middle grade and I feel that’s my sweet spot.

So, let’s start with Dare Club.

It has 24 chapters. If I can read, edit and revise 2 chapters a day, that would take me 12 days. I’m already done 5 chapters, so that leaves 19 and I believe I could complete this in 10 days.

I don’t have a good title for this manuscript. But the premise is: what happens if a boy who always says the wrong thing finds an iPod that lets him read people’s thoughts?

My pitch is weak. But it’s a start.

“Jace is really good at always saying the wrong thing. When he finds a magical iPod at a flea market, he thinks he has the key to his dreams, starting on the soccer team and getting his first girlfriend. But his life turns into a nightmare when the iPod – and knowing people’s secrets – causes more problems than it solves. Will Jace figure out the real power of the iPod before it’s too late?”

I’d like to 1. write the outline and synopsis. 2. Read, edit and revise. 3. Submit in January.

Outline should take a day, reading and revising 2 chapters a day means at least 2 weeks. And so just this manuscript plus Dare Club takes up all of December.

This manuscript also lacks a title. But the premise here is: What happens if the girl who never finishes anything decides she’s going to run a marathon?

The pitch goes something like: “Nobody ever takes twelve-year-old Whitney seriously, mostly because Whitney doesn’t take life seriously. But when Whitney decides to run a marathon, no one believes her. Will Whitney change who she is in the eyes of others or learn who she really is?”

I’d like to 1. write the outline and synopsis. 2. Read, edit and revise. 3. Submit in February.

Also I need a title. I’m thinking “Finisher.” Or “DNF” (that stands for Did Not Finish).

Probably the same timeline as Manuscript 2. Can I do three manuscripts in two months? Maybe if I give myself a clear accomplishment goal like “two chapters a day.” That feels defined and manageable.

I also need to finish revising “Will Call” and “The Hunter Case” and send them in to the ghost story competition before January 2017.

I want to draft the text for “I Really Love You, Mom, and I Mean It” and bring that to critique group. I also want to craft the dummy for “Digit” and send that on to my selected publisher.

Can I get those short stories and picture books done by February?

Only if I don’t do anything else.

One Response to “Manuscript Goals”