This is a photo of me in New York City with antlers, not horns. That’s significant, if you’ve had a chance to read my story “Cernunnos and Me.” The story is about being a hunter, about going after what you want. The day I took this photo was the day I attended my first Pen Parentis salon and received my fellowship award.

Writers are hunters. We chase after our prey – the elusive story – consume it, and crave more.

Sharpen your weapons, writers, because the Pen Parentis Fellowship is now open to submissions. From now until mid-April, Pen Parentis wants your new, never published stories. One skilled writer will be selected as the 2017-2018 Fellow and have their story published in Brain, Child and receive a $1,000 stipend to continue their craft. 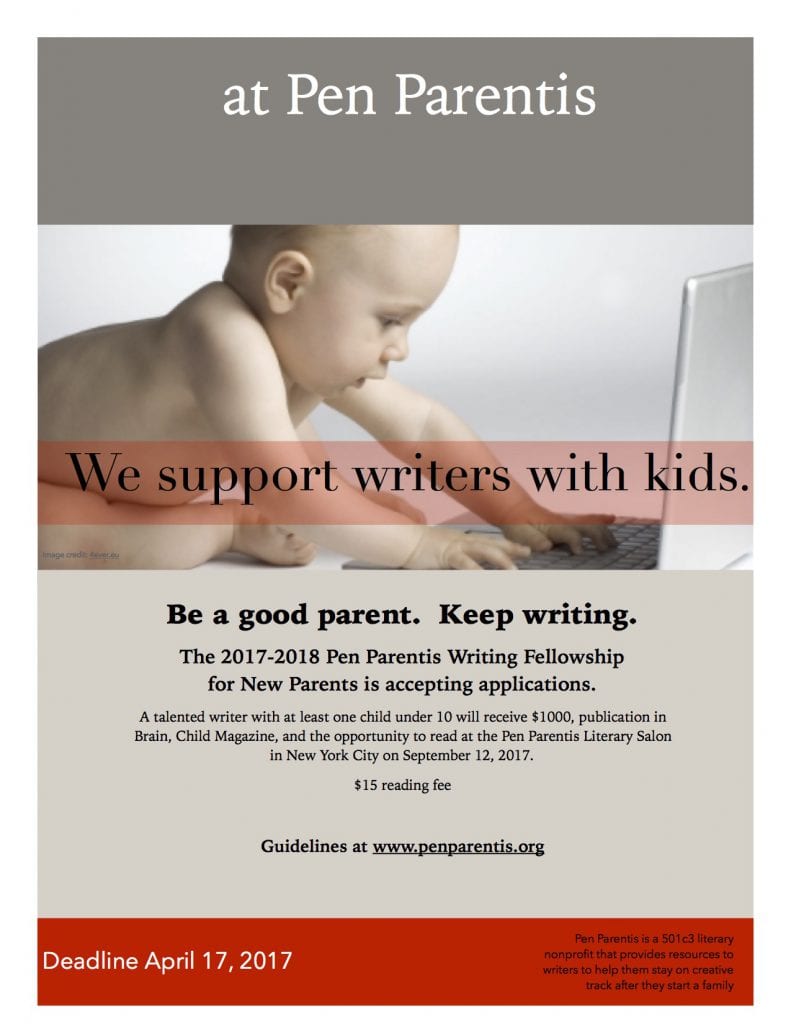 I still remember the day I received the call from M. at Pen Parentis. I was smack in the middle of parenting. It was summer and I was picking the boys up from art camp and they were telling me three different stories at once and I had my hands full of art projects and was trying to thank the teacher and my phone rang with an out of state number. I don’t often pick those up, but this time I did.

As I answered the phone I said, “Boys, can you just give me one moment to take this call?”

M. laughed and laughed and told me she knew she had the right person and told me I had won the fellowship. I was in shock. I sat down. My kids stared at me and then broke out in cheers when I explained what was going on. It was one of the most special moments of my life as a writer and as a mom, and honestly, I’m glad they were there with me.

The Pen Parentis award night was in September, my birthday month, and I was so lucky that my mother-in-law could stay with the boys while my husband and I spent three fun days exploring the city and attending a literary salon in Manhattan. I’m not really a shy person, but I felt surprisingly nervous about reading my story aloud. It’s quite different to share my stories at critique group, or have people read them quite a distance away from me. But reading aloud at a salon meant the reactions were immediate and quite visible.

I met other wonderful writers who offered support and some very kind compliments on my story. My favorite, most thrilling part, was when the audience laughed at just the right moments.

My children do inspire my writing, but it also seems like sometimes they conspire against it. It’s a balancing act, but groups like Pen Parentis know that and want to support us. I look forward so much to returning to New York this fall and meeting the next fellow. When I won, I was passed an invisible crown. I am thinking I might pass on something more personal, something inspired by my story.

I wish you a bountiful hunt.