I love birding. I love being out in nature, listening to bird song, spotting a feathered friend in the leaves and branches.

I love keeping track of birds from year to year. January 1 is so exciting because I get to count familiar birds all over again! I’ve some wonderful birding moments this year and it’s only January!

In 2022, my first bird of the year was a bananaquit. We were in Puerto Rico and these little birds were everywhere.

My first bird of the year in Pennsylvania was an American Robin. Kind of a classic.

A few days ago I heard some agitated crows outside. I went to take a look because feisty crows usually means a good hawk sighting. I was delighted and surprised to see the crows harassing a much, much bigger raven. I even heard the raven croak!

Then on a Thursday morning, as I let the dog out, I heard the unmistakable trill of a screech owl. We have an owl house, but it’s been empty for years. I glanced at it and was shocked and amazed to see we had a new neighbor! 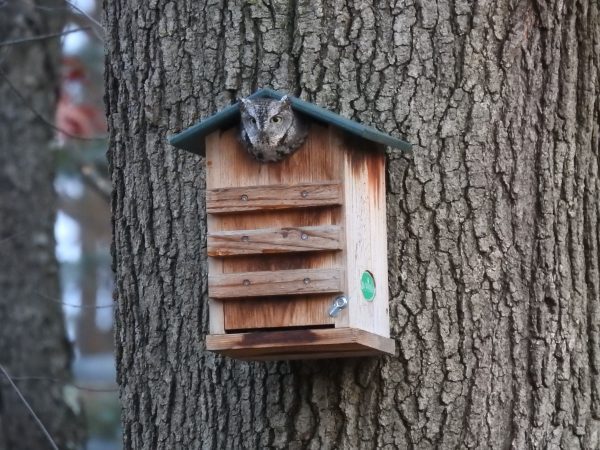 Our owl house is south facing, and screech owls apparently love to get some sun. I don’t know for sure if it has made a nest in the box or if it was just stopping by. But I hope it stays!

Later that same day, I saw two red-tailed hawks land near a nest I’ve been watching. I thought we might see some great horned owls nest there, but I’d love to watch red-tailed hawks raise a family.

My family has seen the pileated woodpecker around, and we had golden-crowned kinglets in the yard, too. 2022 is starting off as a great year for birding!